"Zacapa continues to progress its cornerstone South Bullfrog gold project towards its inaugural drilling campaign," comments Adam Melnik, CEO and Director. "The follow up geochemical programs conducted are enhancing our understanding of the most prospective drill targets at the project. We are well positioned to execute on the phase 1 drill program with Boart Longyear following the expected receipt of permits from the BLM. AngloGold Ashanti's continued consolidation of the Beatty District, following its acquisition of Coeur Mining's Crown & Sterling projects for up to US$200 million, demonstrates a clear path to value creation for Zacapa by exploring in a prolific district where major mining companies are actively making new discoveries, acquiring competitors, and building new mines."

Follow up soil grids (25 metre stations by 50 metre lines) have been completed at Longtail and Bottom's Up to aid in defining the structural orientation of previously discovered geochemical anomalies and outcropping silicified zones (Figure 1). Additional reconnaissance sampling was also completed in the Sourdough area along the northward projection of a major fault that displays extensive alteration at the Vanderbilt Mine at the southern boundary of Zacapa's claims. Rock chip and grab sampling was conducted along mapped structures in the Shingleback and Sledge areas. In total, 893 soil samples, and 294 rock chip and grab samples have been collected. Results are expected this month. 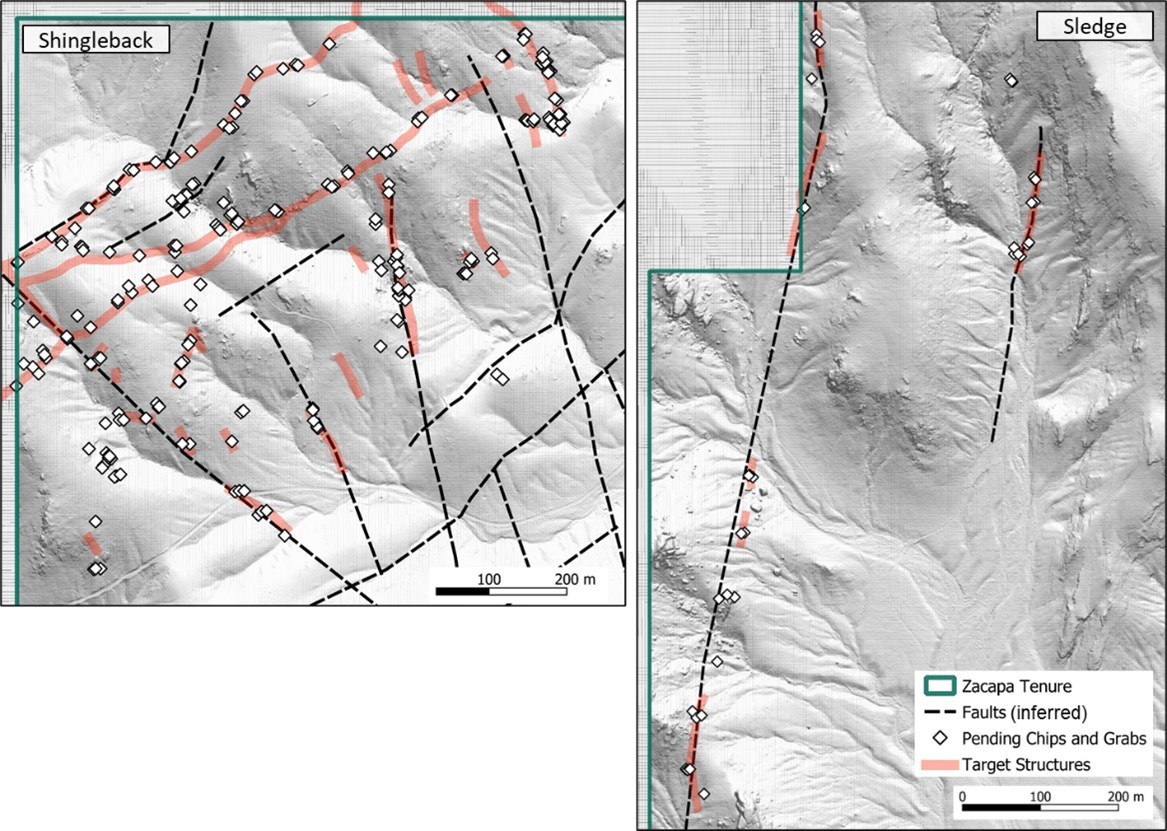 The Longtail prospect consists of a intensely silicified, alunite and kaolinite altered rocks surrounded by alluvial cover and occurs near the intersection of several geophysical lineaments identified in both magnetic and gravity surveys (Figure 2; see news release August 24, 2022). The area is also contains a resistivity feature (elevated resistivity) identified by an IP geophysical survey (see news release April 27, 2022). Recent geological and structural mapping suggests that the western portion of the outcrop may be down dropped by faults and covered by post-mineral sedimentary units and recent alluvium. A drill fence is proposed to test this hypothesis by drilling across the silicified outcrop, into the resistivity anomaly and perpendicular to the inferred fault. 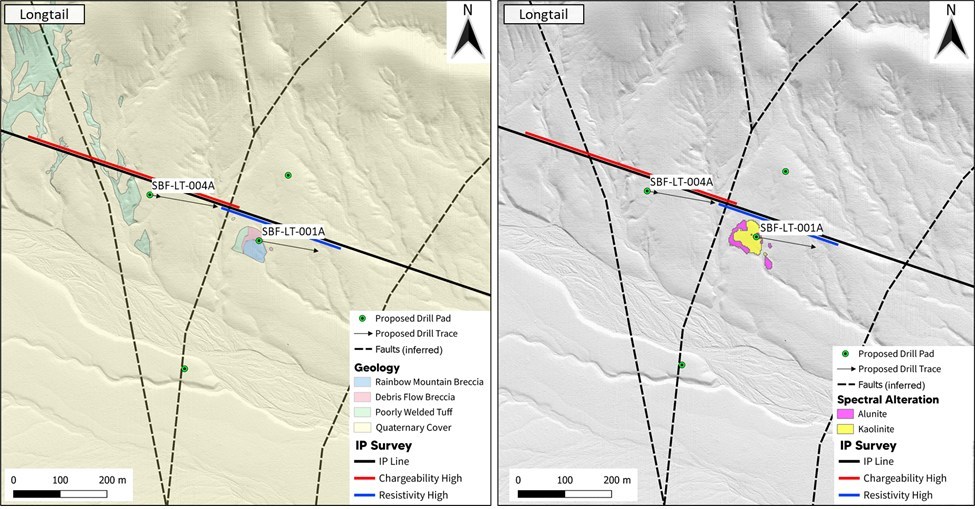 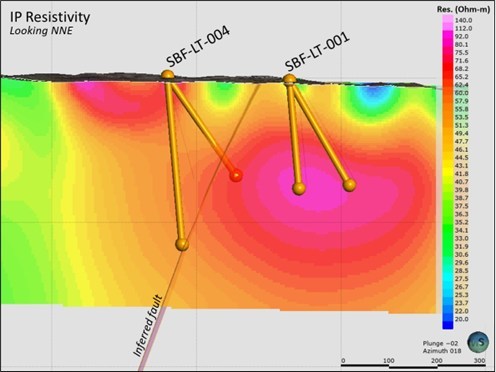 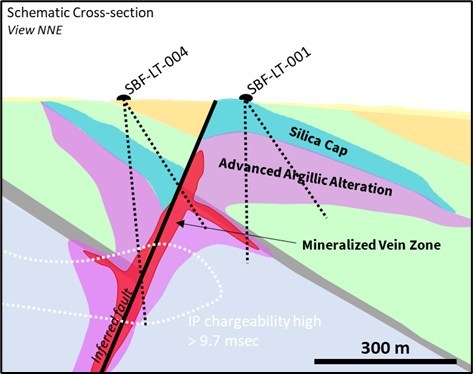 The most pronounced IP/resistivity and chargeability features in the 21 line-kilometer survey occur on the south side of the Shingleback target area where several faults are present. Zacapa has chosen to test this anomaly from the SE (SB-016) to maximize the number of fault intersections while drilling the core of the strong IP resistivity high. While this is the primary focus, Zacapa is also testing the potential for gold mineralization at the Twin Shafts fault (SB-006B) and the Basalt fault (SB-011) separately in addition to testing the structure hosting mineralization at the Schoch Shaft (SB-012) that has seen exploration activity within the last decade (see Figure 3). 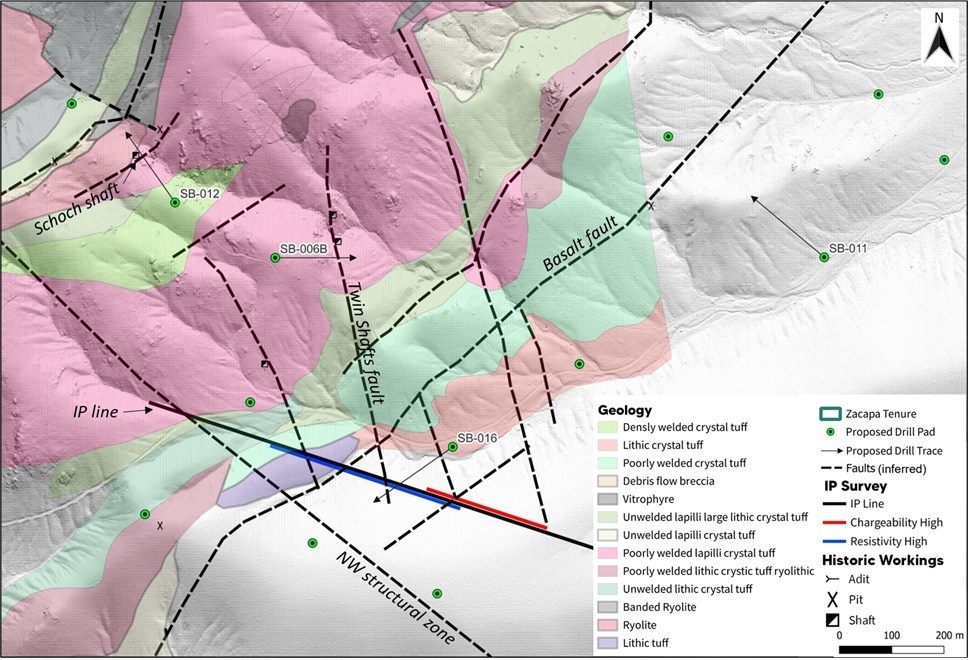 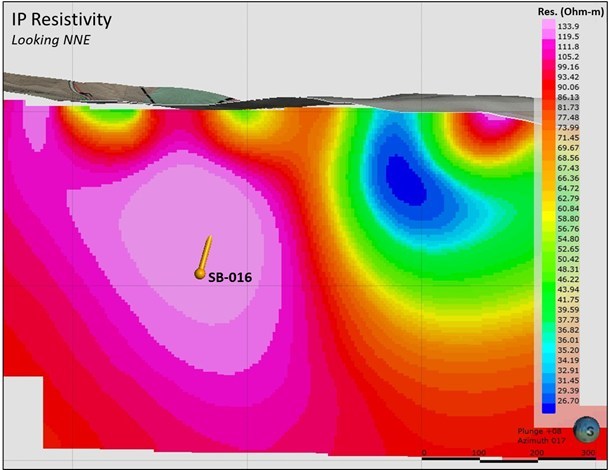 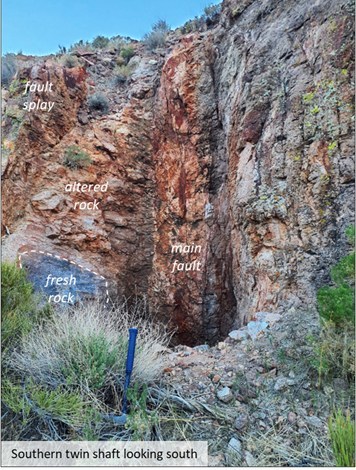 The Sledge area contains several N-S trending through-going faults (Figure 4). Initial drilling at Sledge is focused on testing the most significant structure, the east dipping Sledge fault, which parallels the western boundary of the property and is interpreted as a northern splay off the Montgomery-Shoshone fault which hosts the historical Montgomery-Shoshone deposit10. Drilling is designed to test the gold potential at multiple locations along strike of the Sledge fault starting with three reconnaissance drill locations. 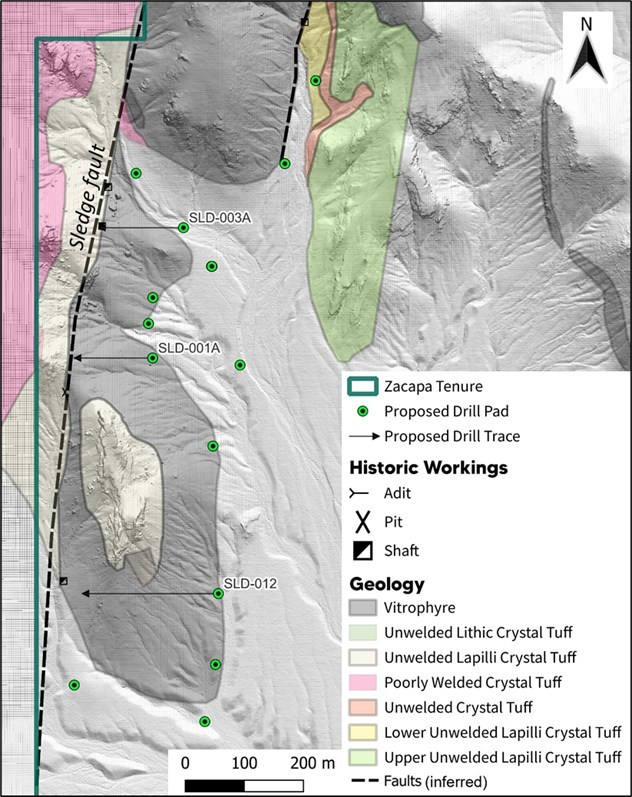 About the South Bullfrog Gold Project

The South Bullfrog gold project is centrally located in the Beatty District in the heart of the Walker Lane Trend. The Beatty District has seen rapid increases in gold resources, currently over 8.6 million ounces of gold. Zacapa's project area is 5 kilometres south of AngloGold Ashanti's North Bullfrog development project, and 11 kilometres west of AngloGold Ashanti's Motherlode and Silicon projects that are anticipated to be producing gold within the next 3 years. AngloGold Ashanti completed its acquisition of Corvus Gold for US$370M1 and recently continued to consolidate the Beatty District by acquiring the Crown & Sterling projects from Coeur Mining for up to US$200M8. AngloGold has stated that the combined assets will help the Beatty District become a large, long life, low-cost operation with the potential to develop Tier-1 "company making" mines (Figure 5)2. South Bullfrog is comprised of 488 unpatented mining claims covering approximately 9,900 acres with a clear path to value creation by executing rigorous exploration in the centre of an increasingly active district where major gold mining companies are actively acquiring property and developing new mines. 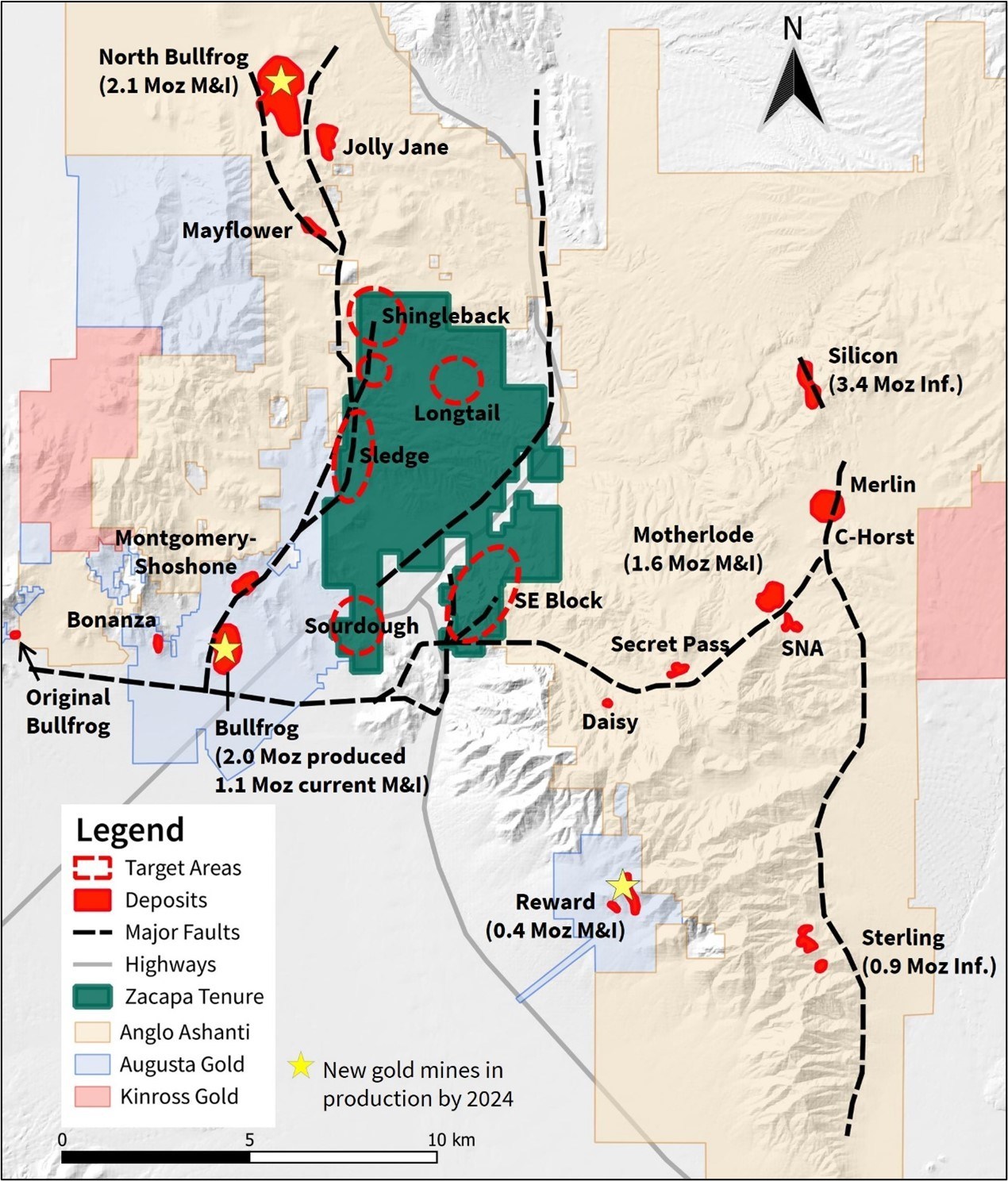 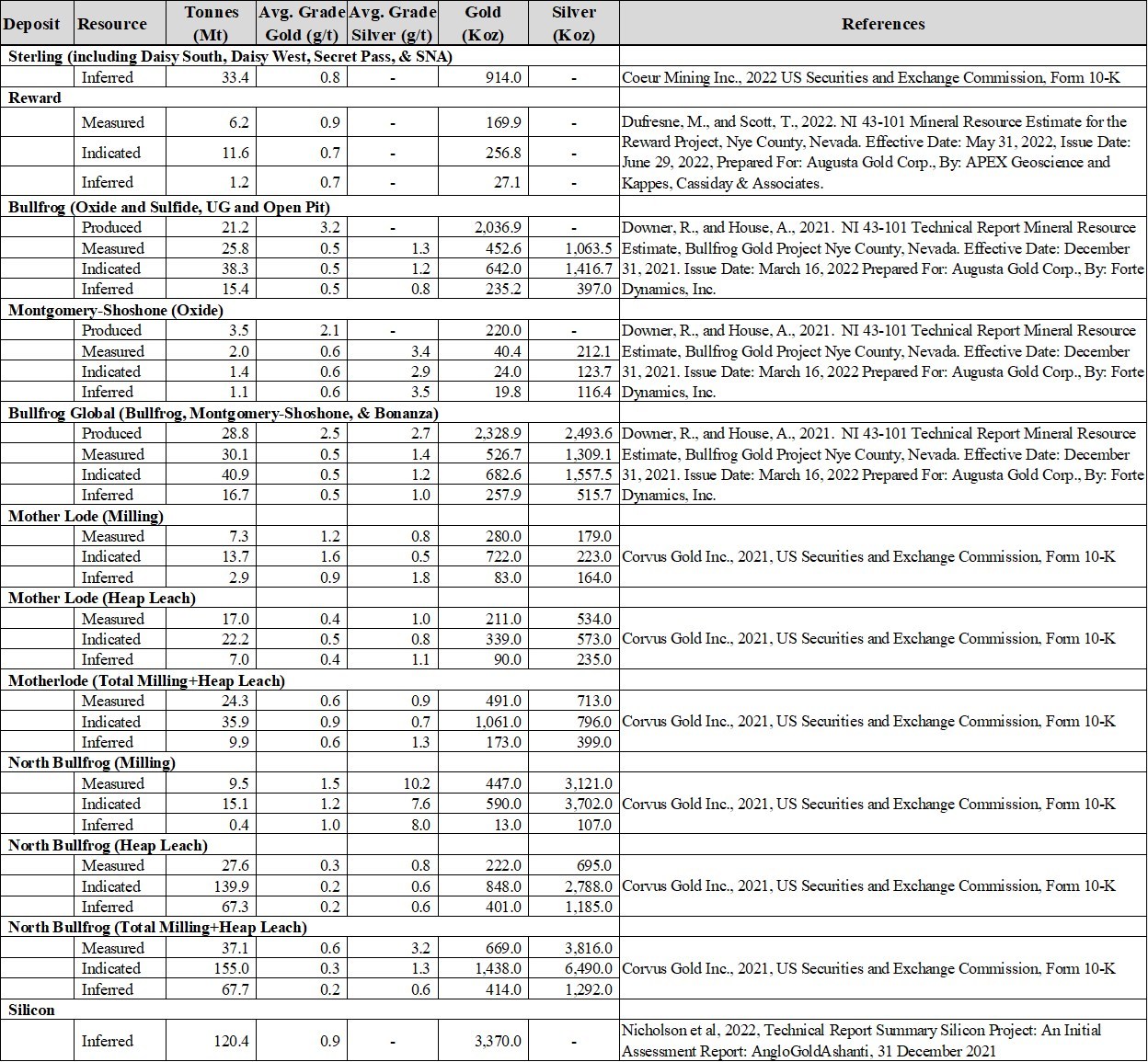 Zacapa is a mineral exploration company engaged in responsible exploration for the new energy economy. Its projects are concentrated in world class jurisdictions in the southwest U.S., including Arizona, Nevada, and Idaho. The portfolio includes porphyry copper projects at Red Top and Pearl and epithermal gold projects at South Bullfrog and Miller Mountain. These assets are being advanced by a highly disciplined and seasoned professional team with successful track records of discovery, resource development and mine permitting.

For more information, please visit www.zacaparesources.com. All documents are available on Zacapa's profile page on SEDAR at www.sedar.com.

All scientific and technical information contained in this press release was prepared under the supervision of Daniel MacNeil, MSc., P. Geo., and a "Qualified Person" as defined by National Instrument 43-101.

On behalf of the Board of Directors,

Past performance is not an indicator of future returns. NIA is not an investment advisor and does not provide investment advice. Always do your own research and make your own investment decisions. This message is not a solicitation or recommendation to buy, sell, or hold securities. NIA has received compensation from ZACA of US$100,000 cash for a twelve-month marketing contract. NIA's President has purchased 174,200 shares of G in the open market and intends to buy more shares. This message is meant for informational and educational purposes only and does not provide investment advice.